Last night, a dear friend of mine came over to chat and hang out.  It was supposed to be the night before her wedding, but due to some difficult circumstances, the wedding had to be postponed.  I was going to be (and still hope to be) her bridesmaid.  Mom and Dad were going to a fundraising gala, so I decided to put on my dress and celebrate for just a few moments with them.... I also wanted to show the bride my dress. 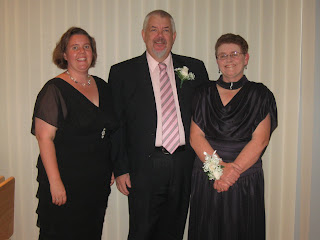 This morning I woke up to the sound of the phone ringing.  The bride wanted me to come hang out for the day with her and her fiance and family.  I headed over to her fiance's house and soon learned that he was a pig farmer, who also raised 18 chickens and roosters.  He came in the house moments after my arrival, saying that he thought one of the hens was going to die.  I offered two suggestions - to wrap the wound, since the bird looked injured, or to end the birds life.  Option B was chosen after we took a closer look. 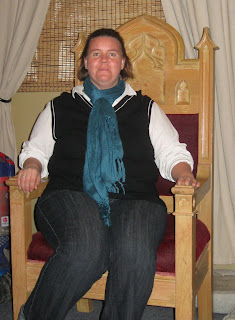 Moments later, the chicken was taken out of its misery, and I hung out in the livingroom.  :)  This cool chair made me feel like royalty.  For a couple of hours, while the chicken was hanging in the shed, we went to a huge market.  We had a great time walking around, checking out all the wares and fashions.  Then back to the house to prepare the bird for the freezer.  It was a year ago since I had been a part of turkey's preparation for Thanksgiving.  I set a big pot of water on to boil and soon we were de-feathering and I was butchering.  It felt great to be helpful!  While the bride-to-be was on the phone, she said, "O ya, Karen is here, and she is from Africa!"  I had to chuckle.  The groom was impressed with my Fear Factor bravery and thanked the bride for having such a fun friend. 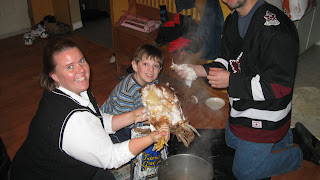 For a few hours I disappeared so that I could go to a birthday party for a sweet four year old girl.  When the celebration was over, there was a lot of leftover birthday cake.  With a little creativity, I brought it back to the bride and groom-to-be's house, so we could top off our day with a piece of Happy Unwedding cake.  Loads of laughter and hugs were shared and together we knew we had pulled off an adventurous day.
Posted by Karebear at 8:02 PM