A Tribute to Grandpa Lubbers

Grandpa Ralph Lubbers, age 91, went home to glory this week.  On June 17th he was passed away peacefully at the hospital, with my Dad, Uncle Andy, and cousin Kelly praying him into the hands of Jesus.  I was on-route, flying home from Uganda... hoping that I would be able to say good-bye.
(Please hit play to hear the song)


Grandpa was a strong Dutchman, who blessed you with his actions, but rarely ever his words.  You would never hear "I love you", but I know that he loved me.  I fondly remember sitting beside Grandpa in 2008... he handed me a $20 bill and gave me the Lord's blessings to go to Uganda.  He also said at the time... "Well, I don't know if I will see you again when you get back in one year... so take care."  I smile when I think about the 7 extra years that God has blessed me with - times to go fishing together, Skype calls, Christmas and Thanksgiving dinners, and simple phone calls - to talk about the boat, weather, or the garden. 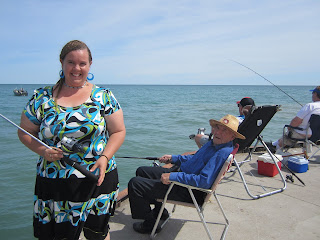 Here I am with Grandpa on the Great Lake Erie. 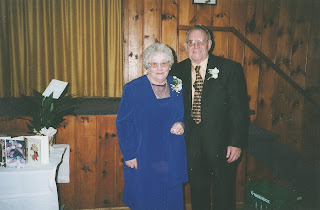 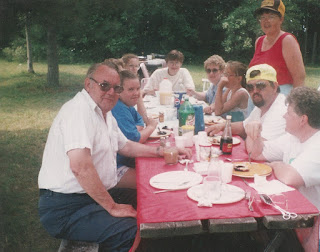 Family campouts happened occasionally when I was a little girl.  Grandpa was always full of stories, jokes that were only funny because they came from Grandpa, and a twinkle in his eye. 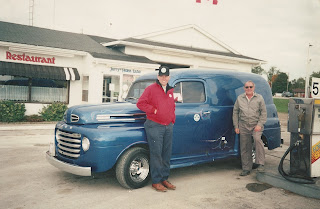 This photo reminds me so much of Grandpa.  When I was a little girl, Grandpa was a hard working pig farmer and a seed salesman.  I don't know how many times he would drop by our house for a cup of coffee as he was selling seeds in the area.  He seemed a constant in my life.  Living only 20 minutes away, we saw him quite often. 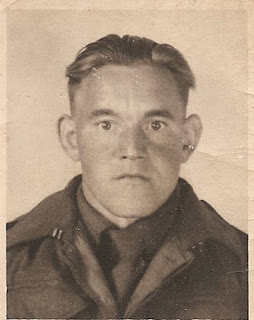 I will never forget his stories of war - during his time as a youth in the Netherlands... and how he hid in a barn for two years so that he wouldn't be taken to Germany.  He spent his time tucked under blocks of hay, carving pipes and chatting with a neighbour who was hiding with him.
Even though Grandpa was a heavy smoker for most of his life, he taught me one of the greatest life lessons.  At the age of 3 or 4, I remember sitting at his kitchen table, surrounded by 1970's orange floral wallpaper.  He handed me a cigarette.  I smoked it, choked on it, and vowed never to smoke again... and I never did.  :) 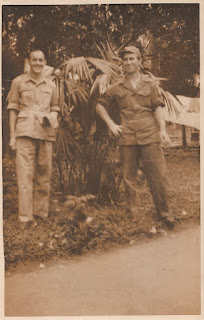 Grandpa fought for 3 years in Indonesia, after WWII, and when I went to the Philippines from 2001-2004, he finally started opening up to me about his time there.  We talked about the beautiful people, the tropical weather, yummy foods, church, and so much more, but you would never find him talking about battle.  Grandpa served as a chef in the army and so I grew up eating many scrumptiously spicy Indonesian dishes.
I remember one story that he told about when the soldiers had to move base camp.  The cooks were going to cook from the old base while the soldiers moved to the new camp and set up.  So hours later, with ready foods being hauled in the back of a military lorry, they headed through the jungle to bring food to hungry soldiers.  Driving through winding, mountainous roads, the brakes failed on the way to camp.  The truck overturned and spilled a huge vat of rice into the bush.  Grandpa told me that as the sun was setting, the men were shovelling cooked rice back into the truck... and somehow they were able to deliver the food, hours late (and probably with some extra jungle grub) to the soldiers.

It's an incredible blessing to know that my heritage is deeply rooted in the love of Christ!! 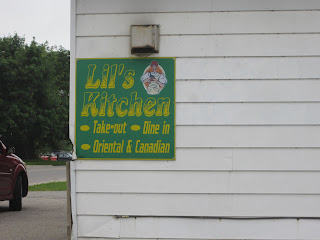 Last summer when I was home, Grandpa took me to this quaint little restaurant.  He wanted to introduce me to the sweetest Filipina that owned the restaurant.  We chowed down on rice noodles and shared stories.  Grandpa was loved by many people.  After landing on Thursday morning, just this week... Mom, Dad, and I drove back to that little restaurant and shared a meal in his honour.
In 9th grade, while taking a home economics cooking class, I did a cultural project on Indonesia.  My teacher was overwhelmingly impressed when I invited Grandpa (and my Dad) to come and be guest chefs for my project finale.  I was so proud of Grandpa when he shared stories and cooking tips with my classmates, and the teacher marked a project she would never forget.  Even my brothers can tell you... the teacher was hoping they would bring Grandpa back when they attended her class.  :) 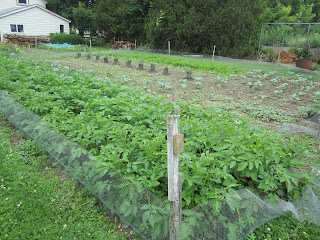 Here is Grandpa's last garden (2015)... he definitely knew how to put a years worth of food in the freezer.  He was often found on his knees, pulling weeds. 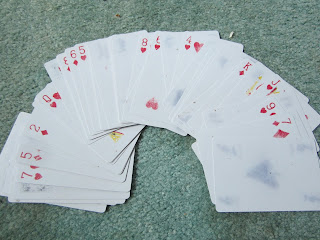 I just have to show you Grandpa's deck of cards.  I can still hear him sitting at the kitchen table, lightly whistling as he played solitaire. 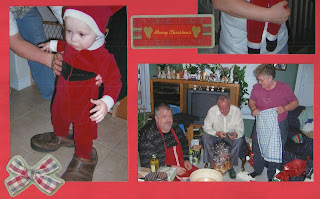 Since Grandma passed in 2003, Grandpa was always a part of our family Christmases... and often our Thanksgiving dinners too.  It just won't be the same without him.


Grandpa - you will be loved and missed greatly.  You leave a strong legacy - having four children, 13 grandchildren, and 29 great-grandchildren.  I pray that you are rejoicing in heaven... with Jesus holding your hand.  I hope you are meeting up Grandma, Uncle Henry, Aunt Roely, the nieces and nephews I never met, and so many more.  May God be with you 'til we meet again.
Posted by Karebear at 4:35 AM No comments: Links to this post

Another fun 2 day training... this one in Asamuk (Amuria District).  The coordinator in Asamuk went above and beyond for hosting me and my team for a Children's Ministry Training.
After driving out to the village on muddy roads, one of the men was very ready to wash my car.
Food was prepared in abundance.
And there were at least 58 people, from a variety of denominations and schools!!  That was awesome!! 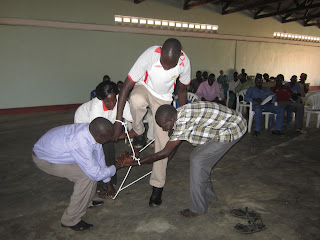 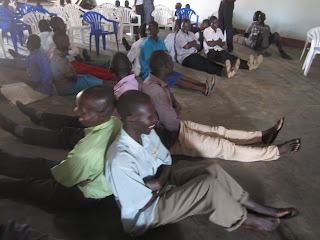 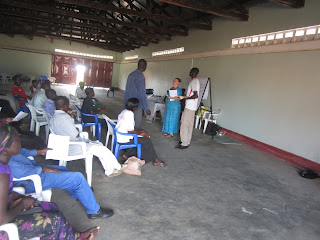 Sharing God's Word and hearing testimonies.  The man in blue, standing, shared his testimony after we looked at different ways to study the story of the prodigal son.  This man felt like the prodigal son - he used to be involved in deep drinking, witchcraft, and other vices, very unhealthy, and then he heard God tell him to give it all up.  He went to our Heavenly Father, and now he is healthy, and a strong Christian.  Hallelujah! 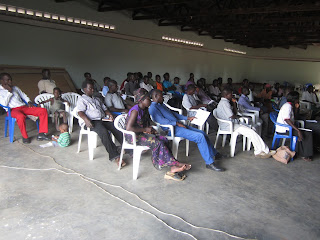 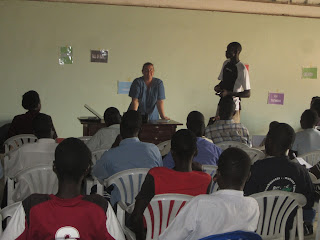 Where are you in God's Big Story? 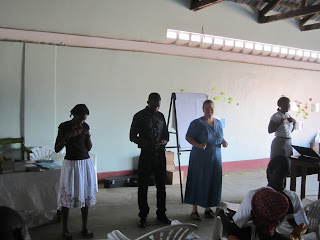 I have the best fun teaching with this team!!  Ann, Chris, Teddy, and not shown here - Peter. 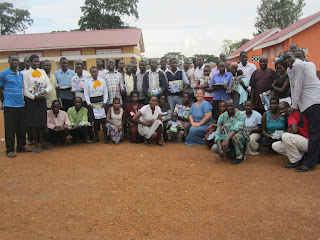 A photo with the whole crew 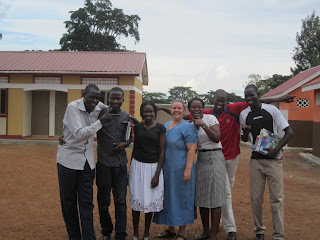 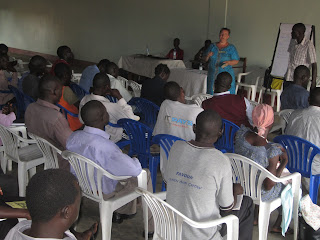 I pray that they will understand how to dig deep into God's Word.  Study it diligently, and share it passionately with the children of Amuria.
Posted by Karebear at 9:27 PM No comments: Links to this post

Oil of Gladness is always excited to do ministry together.  A month ago, an invitation came for us to come and lead worship in Lira... 130 km away.  The plan was to lead a few songs during the 10 am worship service, and then host a praise rally in the afternoon.
Every night last week, we practised in my home and Wednesday evening was dedicated to prayer.  We had a vehicle lined up, but that fell through... so at the last minute I went to talk to one of the Pastors from the Anglican church here in Soroti town, and he kindly offered us the SuperCustom van, since we were traveling for ministry. 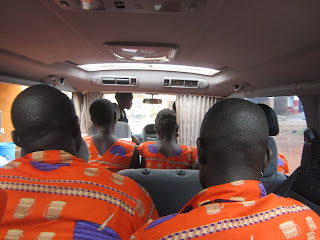 We were a crew of 10 musicians and singers... and one up-and-coming child. :) I drove both directions... I love it that I get to be the driver!!  Although, fighting my way back through the pouring rain with only one headlight was a little tiring. 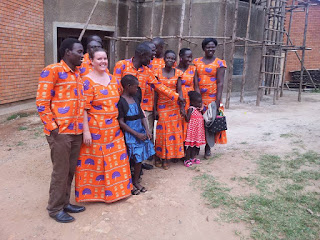 At the end of the day, we took a few group photos, but I don't have any of the official shots.
We arrived just in time on Sunday morning.  A few of us had time to grab a bottle of water before finding our way into the church.  And there we found out that no one really knew we were coming.  The messages didn't get passed along correctly... the missions co-ordinator never informed the priests that we were there to do music ministry.  But when the priests saw 10 bright orange people coming in to the service, they pulled one of us aside and asked us what we were about.
Quickly the service was rearranged so that we could set up a few instruments and we were given the time of praise to a very full church.  People were excited to be led into the presence of God.
After the morning service, a few groups of people met us outside and two men took us all out for lunch at a local restaurant.  Word started spreading that we were coming back for an afternoon praise rally.  We let go of all of our expectations and just knew that we wanted to worship God that day! 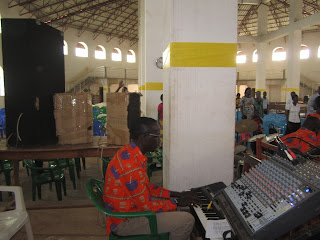 The instrumentalists and sound guys did their best to make sure everything sounded great in the big echo-filled church. 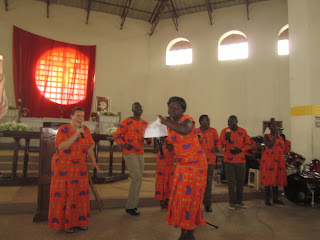 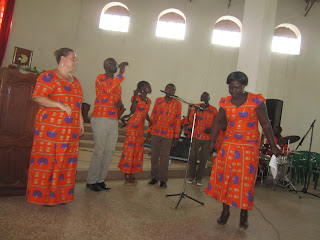 When in Lira, we had to jump and dance in Luo style. 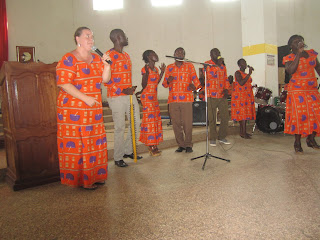 The crowd was small, but worshipful.  God was in this place!
The vicar and a young priest were with us the whole time... singing and video-recording the afternoon.  They inspired the small crowd to take up a collection for us, and it exactly covered the cost of fuel for us to travel. Praise the Lord! 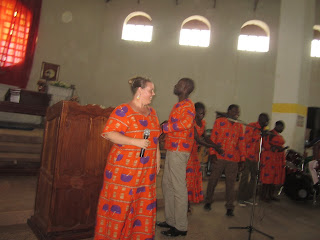 I love being a part of this team and look forward to many more ministry opportunities with them in the future.
On Monday we received feedback from one of the congregants:
Voices - great,
design - superb,
team - wonderful
and set-up - wowest.
Now only tell me who manages the team, otherwise you've got a fan
We don't really have a team manager... we are just a strong team, and everyone pulls different loads.  Some are great at getting the sound equipment ready.  We all choose the song list and encourage each other in leading.  A few are strong prayer warriors.  Some are truly dedicated in time and energy.  We've had our ups and downs as a team, but all in all, a true blessing!
Posted by Karebear at 10:02 PM No comments: Links to this post