A Day in London

June 26 found me in London, England.  I had a 12 hour layover between Toronto and Entebbe, Uganda, so I took the opportunity to get out and explore for a while.  I wanted to meet up with a new friend in the airport, so by the time we finally exited customs, we only had 5.5 hours to see London Central.
Taking the Tube (underground Subway) for an hour, we popped up near Westminster.

Before we knew it, we had to head back underground and journey back to Heathrow Airport.  Uganda bound together.
Posted by Karebear at 7:38 AM No comments:

Feeling at home in Canada

Posted by Karebear at 5:05 AM No comments:

Starting with the flight bump in Amsterdam, this weekend has turned out to be full of surprises.  Coming to the new house on Saturday afternoon was a huge blessing.  Mom's heart was pumping for over a half an hour, and Dad was both happy and sad about seeing me come home.  I was just so glad to be there.  Richard had convinced most of my family to gather together on Saturday, and after a quick phone call on route- it was quickly determined that all of us would be there.  Wow!!  My whole family... that equals an opportunity to take a family portrait.
Sunday I went to church in the morning, and I was able to greet the church... and if any Ugandans are reading my posts - I sent your greetings to the church in Canada and they are sending them back.  In the afternoon I was hanging out with my parents and enjoying some quiet time.  For whatever reason, I was checking my on-line banking accounts and noticed that at least 5 withdrawals happened on my account while I was in Holland and en route.  What!!  Money is disappearing from my account.  So last night I had to call the bank and cancel the card.
This morning Dad and I drove all around the new town, getting all my paperwork caught up.  First stop - the bank, to find out where my money is.... and sad to say, it is coming out of the only bank machine I use in Soroti, Uganda.  From the bank we went to the police station to report the occurrences... not sure what good it will do, but at least it's recorded.  Then to Ontario Services - where I got my license and health card changed to the new address.  And much more... and yet another phone call to the airline.  What do you think?  Am I going to get my baggage back?  So curious.
I think jet lag might be settling in now... so I'm signing off for a while.
Posted by Karebear at 3:47 PM No comments:

Friday afternoon I found myself back at Schipol airport, planning to fly home and be with friends and family by that evening.  As I was checking in, my boarding pass was printed without a seat number.  Curious, I asked a KLM representative and they said, "Oh, that's no problem, it says you are flying standby, but you will get your seat arranged at the gate."  As I was bringing my luggage to the check in counter, there were other people around me chatting about how they didn't have an assigned seat either, so I was starting to be convinced that I would get a seat when I arrived at the gate.
Clearing customs and security, I went to the counter at my gate and there I was informed that the airline had overbooked the flight by 16 people.  An hour and a half later, the doors to the gate shut without 9 of us finding a seat on board the flight to Toronto.  An airline agent quickly came to us and apologized and told us of all our perks for being bumped until the next day:
2000 airline miles
15 Euros to spend on food while waiting for our new tickets for 40 minutes
A phone card to inform friends or family of the change in plans
A night at the Marriott Hotel, with dinner and breakfast provided
an overnight bag with a t-shirt, toothpaste, etc (so my baggage could stay checked)
50 Euros of the next KLM or partner flight purchased
and 600 Euros in cash
The 9 of us who were bumped together became the bumped bunch... we started sharing names and snacks at the airport.  Then all of us decided to stay at the same hotel and have dinner together that evening.  It was so strange not having the sun go down until 11 pm, so I was up late.
At 6:45 am I hopped on the hotel shuttle back to the airport for my 8 am flight to Paris... yep, no longer a direct flight.  An hour in Paris provided just enough time to fly to Toronto.
Waiting at the luggage carousel until no more baggage was being offloaded, I decided to make my way over to the baggage claims counter.  Oh yes, sorry mam, your baggage is still in Paris, it will come tomorrow.  Filled out some forms, then had to clear customs where the lady inspected my laptop bag and teddy bear like they were something truly suspicious.  It took me an hour and a half to finally get out of the airport to find my brother Rick and his girlfriend waiting for me.
Of to the parents house to surprise them!!
And now, it's too days later and all of my baggage is still missing!  I'm glad I have two pairs of underwear.
Posted by Karebear at 1:33 PM No comments:

I have often asked myself: "Who am I, that I should be so blessed?" and lately that has been running through my head again.  My Dad is known to respond to times with "Wow, God loves ME!" and that's how I feel right now.  There are a few reasons why I decided to go back to Ontario for the month of June, and since my ticket home provided an extended layover in Holland, I decided it was best to stop there for a few days.
Before even leaving Uganda though, I started seeing God move in amazing ways.  The week before I left was emotionally tough for me, and the local shop keeper that I have been walking alongside of - for pricing, inventory, and shop appeal, found a way to be a blessing to me.  On the morning of my departure he picked me up from my house and arranged for all of my baggage to get on the PostBus.  Then in Kampala he had a friend pick me up downtown and drive me all the way out to the airport.  Wow, such great service!  All I could say was: "God is GOOD!"
Then after a smooth flight to the Netherlands, a taxi was provided for me there from the family I went to visit.  It's hard to believe it's been 12 years since I was a nanny in Holland.  My little boys are now 15, 17, and 19... but man did we have a great time hanging out. 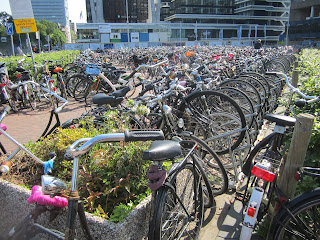 I'm glad I stopped in Holland - it was a peaceful place to unwind from the ministry in Uganda and to prepare for the surprise of going home.  I spent a lot of time just hanging out with my host family, but I also took the bus into Den Haag to explore the city and to visit other friends.  I am always amazed at the number of bikes parked at the central station.
Culture shock started to appear - how neat and organized everything appeared to be, how silent the buses were, the delicious breads and cheeses, the drivers were back on the left side of the car and driving was on the right side of the road, and so much more. 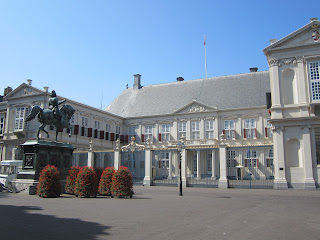 Dutch royalty - a site to behold! 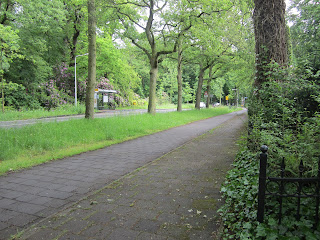 This is one of my favourite Dutch scenes... taken from the end of the driveway - The walking bath, bike path, and then the narrow roads.  I spent some cool afternoons biking around quaint Wassenaar and walking the Australian shepherd in the park by a castle.  I love Europe.
Posted by Karebear at 5:32 AM No comments: