Life on the home front is always full of surprises.  Saturday night I found a rat, dead, in my bathing room. "Great," I thought.  "The poison is working!"  Sunday morning I woke up and wanted to bathe quickly before church, only to find another rat in my bathing room.  This time it wasn't dead though... but dying.  Blood was spattered throughout the tiled room and it was sitting in the drain, trying to get water.  I don't know how to kill rats, so I summoned the help of Victor, my 10 year old neighbor.  He came running over with a piece of paper and said "I'm great at catching rats.  Full of courage, he reached down to grab the rat.  As soon as the paper touched the rat, it jumped, ran through my legs and scooted into my sitting room.  We couldn't spot it under the couch and time was running out for me to get to church on time.  I decided that since it was no longer in the bathing room, I would quickly scrub the bathroom and shower and head to church.
After church, to my delight, the rat was back in the bathing room. More blood.  But this time the neighbor boys were able to kill it.  Rat number 2!!  Yeah.  Another good scrub of the bathroom.
Tuesday Victor left for boarding school.  He is going into P5 and he is so excited to be traveling 2 hours away from home to attend classes.  He packed his metal trunk and headed away with much energy.  So yesterday, Thursday, his twin brothers - Opio and Ocen, age 5, decided they would also pack for boarding school.  I loved it that Opio walked around all day with a Lightning McQueen pack on his back, filled with pajamas, plastic plates, a sling shot, some clothes, a pencil, and a few toy cars.  Ready for boarding!
Throughout the morning, I needed to retrieve a book from my bookshelf tucked in the corner, and that's when I noticed the rat blood.  O great... the rat that escaped on Sunday morning disappeared into my book shelf and bleed on top of two rows of books.  That meant some serious spring cleaning.  The boys - Opio, Ocen, and another 4 year old, Chris - decided that they would help clean.  Before I knew it, my house was a mopping central station.  For those of you who have spent any quality time with kids, you know that chores are easier done without them, but they were having fun and my floors were being "cleaned".  (I had to clean the floors again a few hours later when a third rat ventured into my sitting room.  With the help of Alice, another friend, we killed the thing with two brooms and swept it outside.  I hope I'm done with rats for a while.)
The boys went outside while the floors were drying.  At lunch time, the helper who stays with the twins came over to ask if the boys were with me.  No, they weren't.  I told her to check the flat for Chris' family.  Five minutes later, the helper came back, once again asking if I had the boys.  O no... there is a problem.  I went to all six flats in the compound and asked if the boys were there.  And they were not around.  They had disappeared.  This had never happened to us before with these boys.  Helpers started strolling the neighborhood and I jumped on my bike.
I couldn't see the boys, but about 45 minutes later, their mother called me to tell me that Opio and Ocen were now home safe.  The mother and father had been notified, so they also joined the search.  By the time I reached home, the boys were all in bed, properly disciplined.  The parents started to tell me that they found Opio on one street and Ocen ran home from another direction around the block.  They had all gone out to buy sweets (candies) with money that Chris had taken from home.  Except the money wasn't Ugandan currency, so they ended up with nothing.  They went to a friend's house instead, also 5 or 6 years old and he joined them on the adventure.
I know because in the afternoon I went to MY Supermarket, downtown Soroti, and the shop keepers there said, "Oh Karen, we have a story for you.  Your boys were here earlier. They kept piling things on the counter... 8 apples, 6 juice boxes, 5 cakes... and they had no money."  I couldn't stop laughing.  At least they were all home safe.
Chris took an hour longer to get home, but thankfully the neighbors never stopped looking for him.  He was picked up by a man with a motorcycle who drove around with him, trying to find "home".  After some time, the man decided to take him to Etop Radio Station and that's when Chris recognized our compound and found his own way home.  The man was paid for his troubles and Chris was also reprimanded.
You should see the boys faces.  I think they had a good time while they were out, but I don't think they will ever leave the compound without an adult again.
I laughed when the boys told their mom that they couldn't buy groceries without money.  The mother said, "Even I don't have money."
"Oh Mom, you just need to get a plastic card like Auntie Karen.  She just puts it in the wall and a few seconds later money comes out.  Just get a card, you'll have money."  Ha ha ha!!

Posted by Karebear at 11:23 PM No comments: Links to this post

This year I joined the GPS team in Kenya.  I really needed a time of spiritual refreshment and I felt like it would also strengthen the partnership with my CRWM East and South African partners.  And wow, I am being awakened in prayer.  For the past few days, testimonies - both good and hard bring tears to my eyes.  I feel like my prayer life has come alive.  I find myself praying through the newspaper, or prayer for the security guard as I leave a shop.  I pray that the courage and energy doesn't leave when I travel back to Uganda next week.)
I landed on Friday the 5th, about 6 hours before a big team arrived from North America, so I stuck around the airport and researched and wrote my sermon while I waited for the driver with the GPS sign.  I thank God that He has given me the gift of Wooing others, because within a half hour at the airport I had a sharply dressed police officer and a 5-star hotel salesman sitting with me.  We chatted about life, travel, and yes - prayer.  The salesman let me sit in the hotel's office at the airport.  I stored my bag there, used the computer, sat at the desk to write, and hung out with other friendly staff that work in the airport.  The six hours flew by and before I new it I was delivered to my hotel. 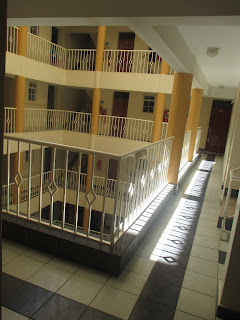 It was midnight when we pulled in to the Tea Tot Hotel.  A beautiful place with good food... in the heart of Machakos.  Machakos was the start off location for the GPS. 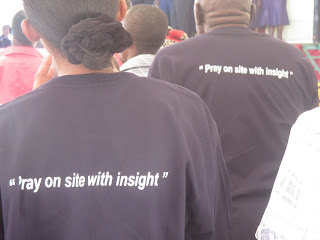 Saturday, close to 40 of us, prayed through the market place and participated in an open-air Kick off Ceremony.  I proudly waved the flag for Uganda!  Other countries represented were: Ethiopia, South Africa, Cambodia, Romania, Kenya, Canada, and the US.  A great time of international fellowship.  Together we have been praying for the world - global concerns, government, police, spiritual, physical.... personal and institutional. 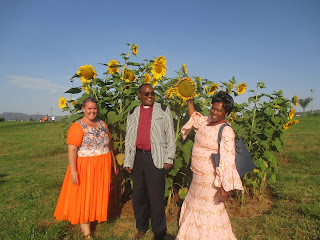 On Sunday we divided in to groups of two's and went with a local pastor to preach and pray at their church.  I had the pleasure of sharing God's Word - "Celebrating God in Prayer" - at Rev. Sammy's church.  His wife Dorcas was a delight to meet and after church they blessed us with lunch in a nice hotel grounds and then we went for a stroll in the park. 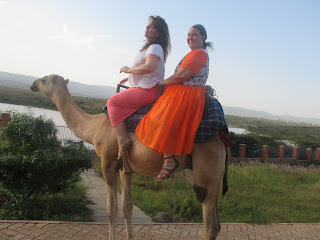 Pam and I couldn't resist a camel ride around the People's Park of Machakos. 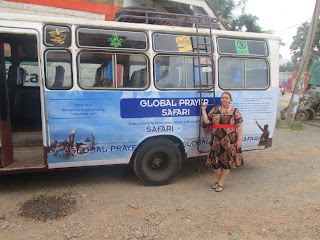 Here is our tour bus - loud, old, and instrumental for most of our transport! 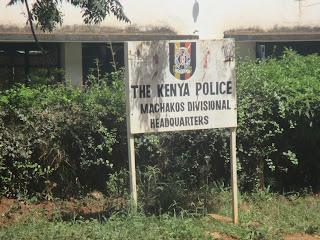 We have prayed for police and their stations in many counties and towns. 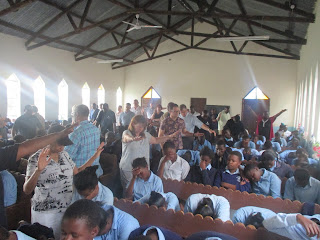 We have prayed in churches 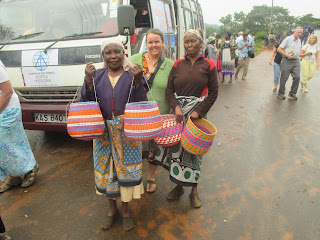 We have prayed for those who pass by and our curious about the team. 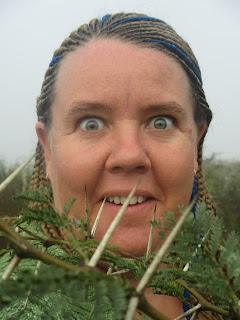 We prayed on the side of the road while our bus had a flat tire and a brake fluid leak. 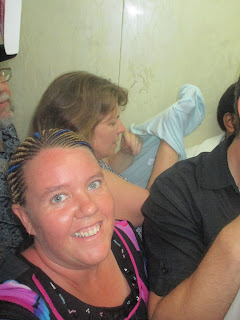 We have prayed in government office elevators where we were crammed for over a half hour - stuck!  God answers prayer in such delightful ways! 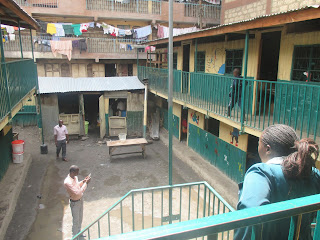 We have prayed for schools in the slums and the villages. 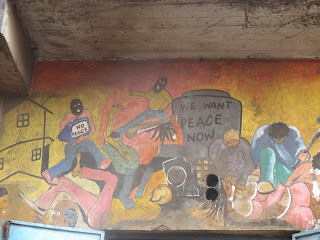 We have prayed for art centres that encourage children. And we have prayed in hospitals.  In the maternity ward I was able to hug a mother who just lost her new born baby, and not a single family member was with her there.  I was able to pray for patients who are struggling with mental illness and for the psychiatrist who treats them. 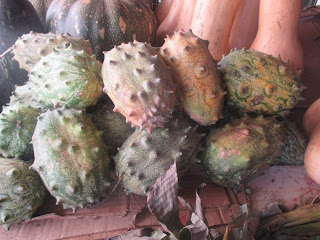 We have prayed in the market and shops, and sometimes we purchase a product or two that help open the door to conversation.  This is thorn melon... looks a little bit that a passion fruit inside.  Not overly sweet, but I did find it refreshing.
This whole trip has been incredibly refreshing.  In a few hours I am going to wave the flag of Uganda through the streets of Nairobi as we pray through another market place and make our way to the closing ceremony.  Tomorrow I will preach in a city church and on Monday I will begin heading home.  The Lord is Good.
Posted by Karebear at 9:30 PM No comments: Links to this post