A Cultural Event - A Father's Burial

Friday afternoon I received word that the father of one of the Oil of Gladness band members passed away.  I called other bandmates and we awaited the news for the where and when of the burial.  Sunday afternoon we found out that the burial would be the following day, in Toroma.  We organized vehicles and gathered at the Cathedral in town to travel together as a group.

Upon arrival at the homestead at 11am, we saw big tents shading a large U-shaped area around the coffin which was under its own tent.  I filed in line with my friends and church colleagues as we walked past the open coffin, to pay our last respects to a man who died of intestinal cancer.  The ground was rough, the grass was dry, and the skies were bright blue.  I sat at the front of one tent, hoping that the sun would not catch me later on in the day, but thankfully the shadows moved in other directions.

I'm always amazed at how people love to go to burials.  It's a full day event, with probably 1500 in attendance.  Lots of speeches - from politicians, family members, and church leaders, as well as, collections, announcements, photos with the coffin, laying of the wreathes, and chief mourners.

As I listened to the children, 10 of them, talk about their father, I became emotional.  Why do we sometimes wait until the funeral to share the good or the tough things about someone?  I felt convicted to let my loved ones know how much they mean to me.  Trust me, you just never know when life is over.

Close to 4 pm the crowd marched over to the designated burial place at the edge of the property and then a meal was served - of rice pilau, cabbage, meat, brown beans, and posho (cornmeal).  We made sure that as a group we went to greet the one daughter that we personally knew and loved... and then we hopped in the van to drive home.

My traveling companions thought it was rather humorous that many children would stand in excited groups and wave at the mzungu in the front seat as we drove through the villages.  They mentioned that maybe I am missing a ministry opportunity - to witness to those children who are still delighted with seeing a white person.  Me, I'm not so sure... it can get tiring.  :)  I just think that we all experienced a great ministry together... sharing the final goodbyes with a friend we love so dearly.

Posted by Karebear at 6:58 AM No comments: 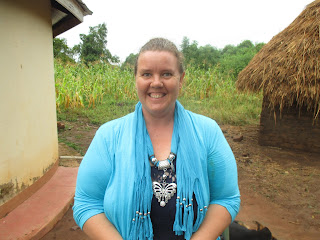 In the barn of Oil of Gladness, we are raising Cambrough and Large Whites, but last year we also inherited a local pig.  She was pregnant and blessed us with a few little ones that we have been raising with the neighbours.  On Sunday, we decided that as a band we should enjoy the rewards of two years worth of work so far.
So a pork roast was held! 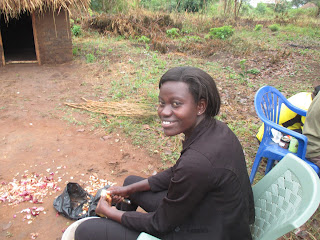 After months of sunshine, the grey skies and rains decided to make an all day presence on Sunday.  The party was supposed to have begun at 2pm, but of course, due to weather, it was delayed.  Which meant we didn't eat until 9:30pm or reach back to town until 11:30pm.  :) 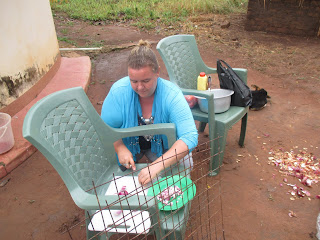 Everyone had a role to play to make sure that dinner was served.  I chopped tomatoes and onions.  We missed other band members who were not able to make it, due to illness, weather, distance, and other programs. 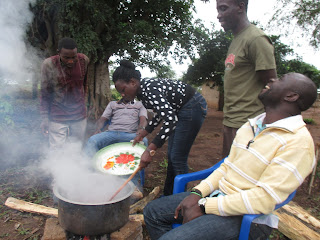 Since it was late, we decided to fry most of the pork and only roast a few spokes to sample. It takes much patience to watch your favourite meat roast over the charcoal. 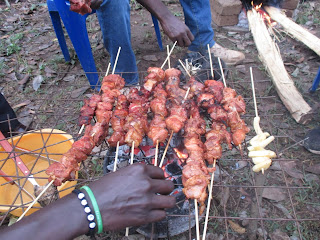 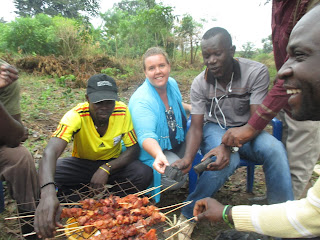 Fun times were had by everyone! 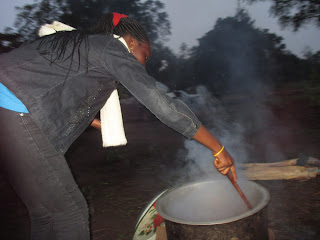 And the next day, the neighbours enjoyed all the leftovers.  :)
Posted by Karebear at 7:46 AM No comments:

Happy New Year!  2016 started out rather chaotic with a trip to Kampala for a variety of reasons.  One - to visit friends who recently had a new baby via C-section.  Two - to pick up my passport from the Immigration offices.  Three - to fix my car in the garage. Four - to see the doctor - for a physical because it has been a few years (I don't like doctors). Five - to eat out a few times and buy some nice groceries to take back to Soroti.  On the way home from Kampala, my car broke down outside of Mbale... and it spent another week in the garage, trying to fix the fuel valves that got damaged after the timing belt blew.  Thankfully I was able to take the bus home and leave the car in the hands of friends and mechanics. 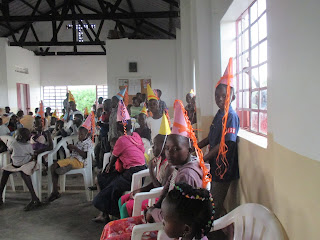 Last Sunday the kids had a huge New Year party!  Lots of songs, games, dancing, and energy.  I was able to share with them the story of Jesus being presented at the Temple, and how excited Simeon and Anna were to meet the Saviour. 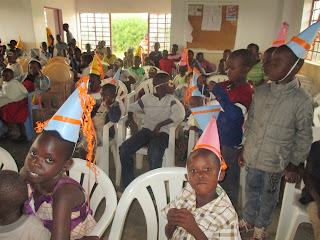 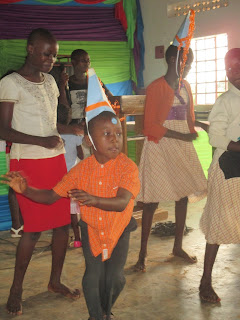 This young man could really entertain! 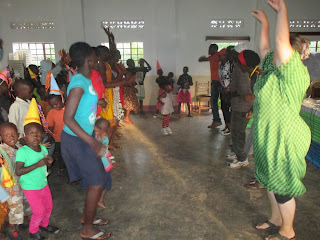 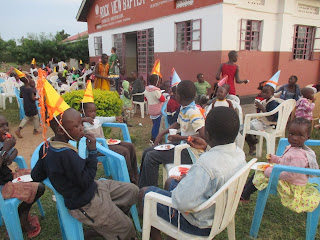 Chapati, fruit, biscuits, juice - the kids were very satisfied.
Then this week I was off to Serere, with Village 2 Village, for three days.  I traveled with a team of young girls from the Sports Outreach Program.  They taught the kids 12 and under, and I spend the time with the teens.  It was so rewarding to dig deep into Discipleship and Evangelism. 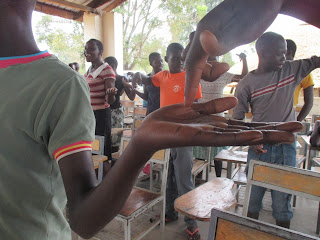 Here they are playing a game.  On the count of three... the bottom hand is supposed to catch the finger, while at the same time trying to remove your finger from the other person's hand. 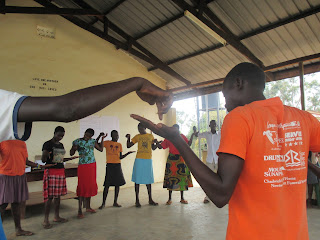 Day One was a little challenging, but after spending three days together, we began to build trust and have a lot of fun together. 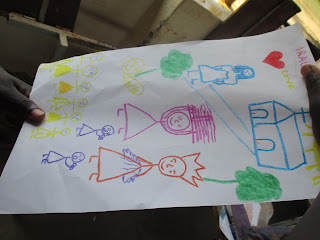 On the last day we studied our Identity in Christ... and this is one of the pictures a young girl drew before we studied the lesson.  That picture describes her - hard working, a Princess, part of a family, loves Jesus and going to church, likes trees and relaxing on sunny days.  :)
Posted by Karebear at 2:12 AM 1 comment: