Confusion at the Temple

Yesterday morning I hopped on my bike to run a bunch of errands around town.  When I was finished I went over to the Sikh temple to visit my beautiful friends.  While inside the home of the priest and his family, the son was out in the small compound riding my bicycle in circles.  Lunch was prepared, and together we shared chapati and lentils before deciding that the girls were going to come to my house to take a shower... since there is no water in town for a few days now.  I was going to carry one of the young ladies on my bike while the other one took a "boda boda" - a bicycle taxi.

Walking out of their home, my bike was not where I originally parked it.  I thought maybe the young boy was hiding it from me, but when he noticed that it wasn't in it's location, he too started to panic.  Before I knew it, Punjabi was being spoken very fast and people were getting upset.  My bike had been stolen.  The priest went to talk to the other tenants in the compound - most of them work for a security company and they were also shocked to hear the bike was gone because they too had seen the young boy riding it around.

It almost felt like it was out of my hands.  Anger and yelling as people chaotically interviewed the shop owners next to the temple, and the head of security tried calling a few of the guards that left for a lunch break.  I texted 3 people to say my bike was stolen, and one reported back that she would pray for the situation.  It was finally decided that I would go home, so I called a dear friend to come and pick me with his motorcycle.

While waiting on the sidewalk, a young man, rode up on my bicycle, ready to report for work after his lunch break.  He had no idea that he had "stolen" my bike.  He thought it belonged to those living in the temple compound and was just borrowing it.  Before I knew it, a mob started to gather.  Everyone was yelling at this young man for stealing my bike.  The sweat started to collect on his forehead... I could see that he honestly was just borrowing it... we just didn't know he had taken it.  The head of security was yelling at this boy: "Why didn't you answer your phone?  Why would you take a bike if you didn't ask the owner?  This is embarrassing and you've done these kinds of things before.  After you are caned today, you will collect your salary and be finished with your job at the security company."  I felt horrible, especially since the security company wanted me to take this man to the police station.

In front of everyone - shop keeper, the priest's family, and the security company (plus on-lookers), I looked at the boy and kindly said, "I am just glad that my bicycle was not stolen.  Thank you for bringing it back.  With me, you are forgiven."  Then I decided it was time for me to get out of the situation, because the mob was just too big.  I told the girls I would bike home to get my car and then pick them up so they could bathe at my house.

Arriving back at the temple 15 minutes later, the crowd was gone.  I noticed the young man was sittingat the back of the compound.  The security officer came up to me and said, "Mam, I am so embarrassed by what happened here today.  But since you forgave the young man, the priest decided to also forgive, and so have I.  He will keep his job today."  I was so grateful!
Posted by Karebear at 10:32 PM 1 comment:

The other day I received a phone call from a beautiful young couple... that their baby girl was born.  They wanted to name the baby after me, or at least have me name the baby.  I went to their hut the next day and held this precious little girl.  Her three year old sister was running around with excitement - saying that her sister was a mzungu because the baby had such fair skin colour.  :)  The sister's name is "Divine Grace", but they call her Grace.  While I was holding this tiny bundle, I thought about grace, peace, love, and joy - JOY!! Yes, Joy would be a great name.  I didn't want to give the baby the name of Karen, because it is not so Ugandan, but Karen means "pure" - and the parents had learned that just a few days prior, but Pure Joy would be perfect.  The parents loved the idea and two days later they went to sign the birth certificate with Pure Joy as her name.  Too precious!
Posted by Karebear at 10:44 PM No comments:

There are times in my life when I don't have time to write, or don't feel like writing anything at all... and then I remember that this is one of the ways the world keeps up with me.  So, here is a short list of all that has been happening in the past few weeks.
Well, that's my life in a nutshell at the moment, although there is probably so much more to tell!

Posted by Karebear at 2:19 AM No comments:

Easter Sunday, Tim brought out the monitor lizard road kill that he had been saving in his freezer.  Beckie lit the charcoal and an hour later we were all chowing down on this delicious reptile.  I had fun peeling the meat off the tail! 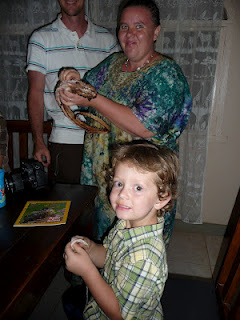 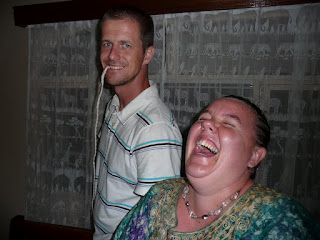 (I stole these pictures from Mandy's blog since I didn't have my camera that day.)
Posted by Karebear at 9:41 PM 1 comment: