Worship in Training and Song

First off, I would like to mention that Opio is much better.  He is back to his normal self - cracking jokes, making faces, and sneak peeking through my front door.  Thanks for praying!
Secondly, here are a few shots from my past two weeks. 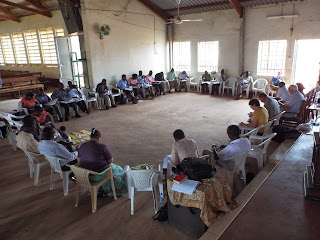 Serving God in Work and Worship 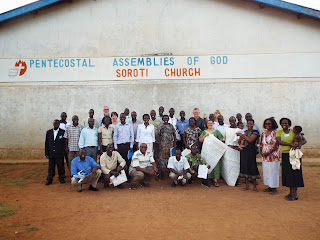 It was great fellowshipping and learning with lots of local church leaders! 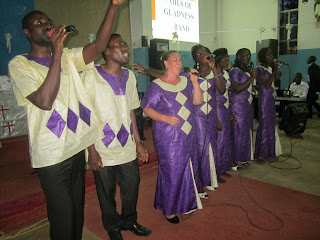 Oil of Gladness - we participated in last Saturday's huge praise and worship event.

I absolutely love singing with and being a part of this choir!! 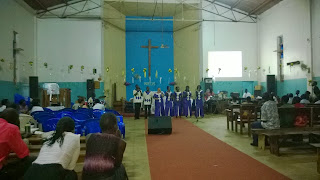 St. Peter's Cathedral, closer to the end of the night.
Posted by Karebear at 6:24 AM No comments: Links to this post

Today my neighbour's helper came over and knocked on my door.  With fear on her face, she explained that 3 year old Opio was very sick and she wanted me to call the mother who was at work.  After a quick phone call, I found out that the mother was called out of town with her job for the day, so she wouldn't be able to come and check on the twin, but she wanted me to take the baby to the clinic.
Opio looked scared.  When I went to see him, he was curled up on the bed, crying his eyes out.  I rubbed his head for a while and asked him what was wrong.  Normally talkative, he was absolutely quiet.  His twin, Ochen, said that Opio's stomach was paining.  I told Opio I was going to take him to the clinic.  He struggled to get up and put his shoes on.  In the car, he looked like a lost little boy.  Usually while driving he is telling me about trucks and motorcycles and giddy with excitement when he sees a bus.  Today he just sat there, mute and spacey.
In the clinic, the nurses thankfully knew who he was and did everything they could to help him see the doctor.  I was delighted with their personal skills.  But after seeing the doctor, my heart was burdened.  He never once touched Opio.  He didn't check for a fever, he didn't feel his stomach... he just signed a form and sent him for blood work.  The pin prick of blood came back with no results, but even the nurses said "Oh, he must have malaria, it's just not showing up on the slide yet."  Three bottles of syrup were prescribed - an antimalarial, a cough syrup, and a painkiller.  I went home praying that it was something really simple wrong with my little boy.  Maybe it was constipation.  But I just couldn't believe I was supposed to give this child all these medicines without really seeing a doctor.  Please pray that Opio is okay... it's scary to see the little one so sick, especially when the words are difficult for him to express what is really wrong.
I was kind of proud of Opio though.  At home he was bawling.  In the car he was whimpering.  In the clinic he sat stoic and dry eyed.  He didn't blink a tear when the nurse pricked him for blood work.  But while sitting alone in a medical room, waiting for the syrups, he began to cry again, with pain taking over his eyes.  As soon as the nurse walked in, he dried his eyes with his kerchief and snuggled on my lap until all the doses were explained.  To me he showed such strength.  Trust me, he wasn't being weak around me, but he was sure being strong around the clinic staff.
Posted by Karebear at 11:09 AM 1 comment: Links to this post

Singing in Spirit and in Truth

Even though I enjoy writing, words can not describe the emotions that pass through my heart when I am able to worship God - especially with people who have become amazing friends and are quality musicians.  For about the past nine months, Oil of Gladness band has met in my home on Friday nights - for singing and fellowship, and just recently, doors have opened for us to do ministry as a group.
This coming Saturday, October 26th we are singing at a big church in Soroti town.  The choir is made up of singers from at least four different churches, and to me, that is an amazing accomplishment already.  I love seeing the churches being united in purpose.  We have now been practising for weeks - learning new songs and blending voices so that God can be glorified.
Last Saturday we were together for at least 5 hours, but that day was not for practise - it was for prayer.  It has been a long time since I have gone to a prayer retreat and wow, it was so encouraging to rest in God's presence.  We spent time confessing sins, praying about worship, getting our hearts right before God, asking the Lord for guidance and provisions for next week's concert, and we lifted each other up to the Lord.  Together we battled through spiritual warfare - knowing that Christ is King!!
On a fun note, the girls and I have picked out colours for our uniform and designed the dresses and shirts.  The guys have all been measured and at least two tailors are busy at work... so hopefully we will look professional on Saturday.  May the Lord's name be praised!
Posted by Karebear at 10:54 AM No comments: Links to this post

A Call for Help

A man I met during last year's youth conference preparations called me and asked him if I would meet him in the school offices just up the street from my home.  I couldn't quite remember who he was, but the youth conference was a good starting point.  So I arrived at the school at one to find two people in the principal's office, waiting for me.
The man introduced me to the pastor of a small church that is running inside the school.  The church has maybe 8-12 children on a Sunday and they are looking for some training, but the call was for another occasion.  They pulled out an invitation - where kids from the surrounding neighbourhoods were all being invited for a Children's Day on November 2.  The Pastor talked about how the kids were really important in a church and they felt this day would be really important for door-to-door evangelism and church invites.  As I was holding the invite, excited about this up-coming day, I awaited the reason for my call to help.  After a few more moments of chatting, I finally heard these unexpected words:
"Karen, we are dreaming of this big day and we know that the children are key, but we just have no idea what to do with children.  We heard that you work with children and leaders.  Can you please teach us and be with us during that Saturday program?  Please help us to fill the hours between 9-4."
Wow, that's a fun task.  To walk alongside a church and teach them how to get excited about children's ministry and guide them in all the things necessary to pull off a fun day - Bible stories, games, snacks/food, singing, music, memory verse competitions and more.
Our first real planning meeting will kick off tomorrow.
Posted by Karebear at 8:23 AM No comments: Links to this post